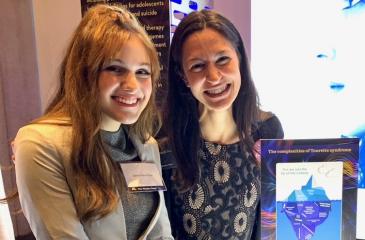 Jane is many things. A youth ambassador. An actress. A teenager. A beloved daughter. A science buff. She has an energy and eloquence about her that comes from years of using her voice to uplift her community. When Jane was six years old, she had the habit of hopping around in circles and repeating words and phrases over and over. She had other behaviors like involuntary noises, eye pulling and throat clearing that she couldn’t explain, until she received a diagnosis that finally made sense: Tourette Syndrome.

“Tourette’s is not the thing where you scream swear words,” explained Jane. “I feel like my job is to help educate and provide resources for people to gain accurate information.”

“Tourette’s is not the thing where you scream swear words,” explained Jane. “I feel like my job is to help educate and provide resources for people to gain accurate information.”

According to the Tourette Association of America, Tourette Syndrome (TS) is a neurodevelopmental disorder that is part of a spectrum of tic disorders and is characterized by motor and vocal tics. Tourette Syndrome and other Tic Disorders are not rare. It is estimated that 1 in 160 children between the ages of 5 to 17 in the United States has TS.

When Jane was young, she felt like a bad kid for not being able to control her behavior. Growing up, there was very little information for Jane and her family about TS. When Jane had a sniffing tic, doctors prescribed allergy medications.

“It wasn’t an easy thing to diagnose,” said her father, Grant, who is a physician at Mayo Clinic in Rochester. “Many tics are normal things to do, so they don’t necessarily raise any red flags, but around second or third grade, symptoms started stacking up and affecting Jane’s progress in school and her social development. We knew something was going on, we just weren’t sure what it was.”

Tics are involuntary movements or vocalizations that are extremely difficult to control. For Jane, she describes the premonitory urges before ticcing as an invisible pressure similar to suppressing a cough in a quiet concert hall, “It’s this anxiety you feel physically throughout your body.” But TS is more than just tics. Jane recalls feeling stuck, having sleeping and temper issues, problems with handwriting, and depression.

“Tourette is an ‘invisible illness’ and tics are just the tip of the iceberg. There are so many comorbid conditions, and that really opened our eyes,” explained her mother, Sara, who has been an active volunteer and consultant for the Tourette Association of America since 2017. "Had we known more, and if we had the kind of support and understanding provided by the TAA earlier, it would have made a huge difference.”

The research and treatment around TS continues to evolve and new things are being learned every day. In 2019, Sara learned of a study opportunity at the University of Minnesota. She and Jane had a Skype call with Christine Conelea, PhD, co-director of the Converging Approaches to Neurodevelopment (CAN) Lab, who was testing the use of Transcranial Magnetic Stimulation (TMS) to help young people with TS control their tics. In the spring, they drove from Rochester to Minneapolis where Jane’s tics were observed and recorded. Research shows that certain areas of the brain are overactive in people with tic disorders, particularly areas involved in movement. During a TMS session, a small magnet is placed against the scalp and electricity is pulsed through to stimulate activity of the brain cells underneath the magnet. It is a noninvasive procedure that serves as an alternative to medication. Dr. Conelea’s research team is measuring how the TMS might change tics and the brain, first steps that will help determine if TMS can be a treatment option for Tourette Syndrome in the future.

“By participating in the study, I feel like I’m doing something for the community to help research go further,” said Jane.

After the TMS study, Jane served as an intern in Dr. Conelea’s lab and worked on a research project together.

“Participants and patients have such critical expertise: the first-hand knowledge of what it’s like to live with Tourette. Jane’s contributions and perspective made our research so much stronger, everything from helping us ensure the TMS process is comfortable to suggesting ways we can measure outcomes people with Tourette care about,” said Dr. Conelea.

Jane’s story and passion for advancing what we understand about TS inspires the work being done at the Masonic Institute for the Developing Brain, a new center that brings together University expertise in pediatric medicine and research to diagnose, prevent and treat neurodevelopmental disorders in early childhood and adolescence.

There are several scientific cores at MIDB comprising of numerous labs, institutes, and research centers collaborating to better the brain health of children. Dr. Conelea will serve as the director of the non-invasive neuromodulation laboratory at MIDB as part of the intervention core.

“MIDB is a home for collaboration across disciplines. The opportunities are endless. Pediatric neuromodulation is a new area, and the capabilities and equipment at the new facility enable us to expand our research and look towards the future,” said Dr. Conelea.“Not all kids benefit from the treatments that are currently available. The more we know about the brain and how to directly target brain processes involved in neurodevelopmental disorders, the more we can help people. I’ve seen patients struggle, and I want to be able to create new interventions to meet their needs," said Dr. Conelea.

“I’m excited about the future and the research going on with Dr. Conelea and MIDB at the University of Minnesota, that’s why we want to be a part of it and do more,” said Sara. “Right now we’re at this amazing precipice. We have the opportunity to demystify Tourette Syndrome and make a positive difference in the lives of individuals and families in our communities and around the world.”

Jane and her family have journeyed across the country as advocates for greater visibility and education around TS. They have spoken at different conferences to teachers, senators and representatives, scientists and doctors, with the hope to promote understanding.

In 2018, Dr. Conelea invited Jane and her mother to speak on a panel about TS at the University. Afterwards, a middle schooler in the audience came up to Jane to thank her and ask, “Do you think it’s going to get better for me?”

So much of what drives Jane is to be a mentor to other young people who see themselves in her, “I want to provide hope and reassurance. I don’t want a repeat of what I felt as a kid, feeling alone or defective,” said Jane. “I try to redirect assumptions on TS and am always open to questions. Even if people are mean, I take it as a moment to educate,” said Jane.

“I try to redirect assumptions on TS and am always open to questions. Even if people are mean, I take it as a moment to educate,” said Jane.

Jane is now 18 and has mild tics like raising her eyebrows or scrunching her nose like a bunny.

“My tics are a part of who I am. It makes me unique and has given me opportunities I never would have had,” said Jane. “If there are loved ones in your life who have TS, or you see a stranger at a grocery store behaving differently, cut them some slack. It’s not their fault. There’s much more to TS than you think.” 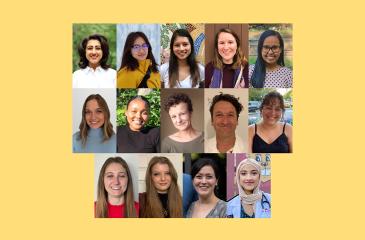